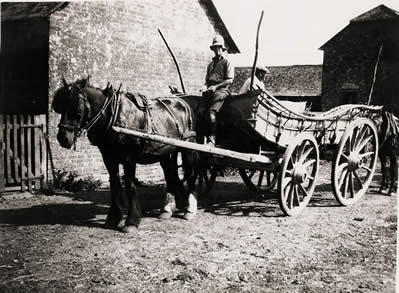 The Wiseman family have been farming in the Ringwood area for over 400 years, with official records dating back to 1600.

William Wiseman moved to Upper Kingston Farm in 1901 when it was then tied to the Morant estate.

The farm was purchased by William’s son George in 1917. The farm is now run by George’s grandson Paul Wiseman.

The actual farm buildings that make up Upper Kingston Farm Cottages were built around 1850 after the original buildings in the paddock burnt down.

During the build up to the invasion of France, D-Day, in 1944, the whole area was the staging ground for the launch.

Although the peace and tranquility has long since returned, evidence 0f the airfield can still be seen around the farm as the tracking for the airstrip is now used as ‘temporary’ fencing.

Thanks to a rural development programme grant from New Forest RDPE (Leader), work commenced on the farm building conversions in November 2009.

The first four cottages were completed in August 2010 with our grand opening on August 20th.

The Stable , being the final cottage conversion, was completed in March 2011.